The male, even in his brilliant spring plumage, is more often heard than seen. I often hear them from the end of April through May singing in the woods. Their lilting melody, in three or four variations, drifts into wood-side fields and clearings from out of the shady forest. If you sit quietly, you may see him fly out of the woods in search of flying insects.

Once their territory has been established, they generally sing constantly for around five to ten minutes, sometimes longer. Then there is an intermission for some minutes before returning to their singing. I followed the song of this male to an area in his territory he seemed to favor. He approached within range of the camera lens after an hour or so.

Last year, along the road that circles Yamagami Dam Lake, I counted five males that had established territories. This year there are three so far, and I expect more will come soon. The females should begin arriving in the first few weeks of May. These birds, smaller than a House Sparrow,(Suzume) brighten the Spring with their beautiful song and colors.

The Chinese Bamboo Partridge, (Kojyukei) and a Great Tit, (Shijugara) were also spotted as I walked along the road around Yamagami Dam. 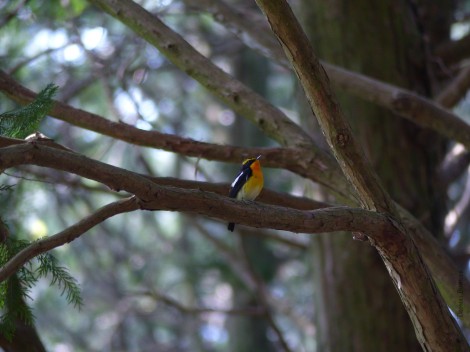 Update on Kingfisher nest site:  I went back to check on the Common Kingfisher Nest site from the last post, and it appears they have abandoned the burrow. They are still in the area, so perhaps they have established a new nest somewhere.

Thanks for visiting the Mostly Birds!

April 14, 2019   The season of new life and growth has arrived! Many creatures great and small are busy raising their young and making homes. The Common Kingfisher (kawasemi) is no exception, and have excavated burrows or reused burrows from last year. Around now, the female has laid her clutch, and the pair are taking turns incubating the eggs.

A few weeks ago, I was walking along the Homan River near my home when I saw something small and blue drop out of a hole in the opposite bank. It was a male Common Kingfisher, and he was in the process of creating a burrow. I had been hoping for some time to have a chance to film a pair of kingfishers at their nest site. I was able to set up a hide (blind) about six meters from the nest in some bushes and trees. The following pictures and video were taken from this blind over the past few weeks. 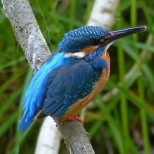 A footnote: After writing this, Dredging of the river upstream from the nest site began. The river had turned a muddy brown. I saw a newly-posted sign that said it would continue until July. Dammit, this can’t be happening I thought. Why can’t we just leave the rivers be?

An hour before the sunset yesterday evening,  I was in the blind to see if the female would return to take the males place on the nest,(only the female incubates at night). I waited until night fell, but did not see any birds leave or enter the burrow. I did hear their calling as they streaked by a few times though, so I am hoping they haven’t abandoned the nest. They are a persistent and tough species, and are known for raising 2 or 3 broods in one year, so I haven’t given up hope yet. I will keep you posted.

April 8, 2019    I went to a favorite estuary of mine last week, and was very happy to see Black-faced Spoonbills, (kurotsura-herasagi) there. On this day, there were three. I suspect more will be flying through soon. Along with the Spoonbills, the ever-present Gray Heron, (aosagi) was there, and a new bird for me; the Intermediate Egret, or Plumed Egret, (chuu sagi) in breeding plumage. Very elegant, with his long plumes and newly grown feathers which he was busily preening.

A Common Sandpiper, (isoshigi) perched in front of my blind for a brief respite from foraging. Some Great Cormorants, also in full breeding plumage were roosting alongside the Spoonbills. They spread their wings of burnished bronze to dry their feathers after diving for fish.

I may return to see if more Spoonbills are migrating through in the near future. I once saw a flock of seventeen there! They are an endangered species. One reason is due to development which is slowly destroying their feeding/resting areas along their migration routes. I hope they do not go the way of the Japanese Crested Ibis, (toki) which is now extinct in the wild in Japan. (see attachment just below)

Please click on any image below for a larger view. 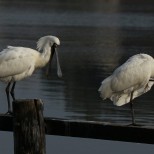 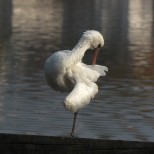 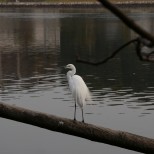 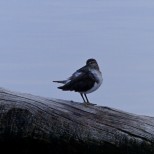 Thank you for visiting, and I hope you have a great day.