December 22, 2018  Last weekend I finally managed to get to Karanno Falls after two failed attempts. This time, I used my cell phone navigation app, and I was surprised at how well it worked. Karanno Falls is an isolated area of  Ishigawa, Sawara-ku to be exact, and the road became extremely narrow and rocky as I neared the falls. As a matter of fact, about one kilometer from my destination, the road was blocked off and I had to walk the remainder of the way. After I had walked about 500 meters, I came upon a landslide, which was the reason the road was closed. There was a path around the landslide, and I continued on to the falls. It was still dark, because I wanted to photograph the waterfall in dawn light, as I have no filters for my camera yet. Filters are necessary in daylight if you want to take long exposures to achieve the soft focus effect. Here I was, in the middle of the woods, in the black of night, and I jumped a bit when suddenly my cell phone said, “You have reached your destination.” and sure enough I had.  That amazed me. I descended a path for about 50 meters, all the while the sound of the falls becoming louder and louder. I set up the camera, and waited for the light to increase.

Karanno Falls is also known as Karan Waterfall. The name Karan translates as the beauty of the plummeting waters resembling swirling petals. One other possibility for the name is a legend saying that a holy man called Karan undertook ascetic training by standing beneath the falls.  The falls are 15 meters high and 3.5 meters wide. “Chikuzen no Kuni Zoku Fudoki” (a description of the land of Chikuzen), written by a Confucian scholar of the Fukuoka domain, says that it is the most beautiful waterfall. 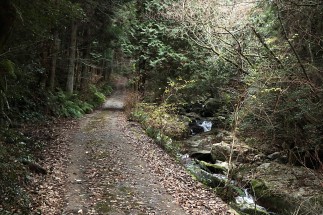 for a larger view.