Last weekend I had planned to drive to Karanno Falls, but I ended up going to Bozu Falls instead, because I misread the kanji and entered it into my car navigation system.  Bozu Falls is quite near Karanno Falls on the map, and that is one reason I thought I was heading to Karanno Falls. Anyway, it turned out to be a good mistake, and an interesting morning.

I parked the car along a narrow road at the foot of Kaneyama mountain. On the way up, I passed a small temple with a house nearby where the local monk resided. There I found a small signboard that read, ‘ Bozu Waterfall, 400 meters’ and realized I was not where I thought I was. Hmm, this could be interesting I thought.

When I arrived at the falls, I set up the camera and began shooting. I guess about 5 minutes had passed, when I saw a couple approaching  out of the corner of my eye. It was a monk and a female companion. As they passed by, we greeted each other with good mornings. They made their offerings to the local god(s) by sprinkling salt and lighting a candle. The monk then removed all his clothes from under his robe, and then put on a fundoshi, (a type of loincloth). Then he took of the robe and walked into the pool and stood under the cascading water all the while chanting sutras for maybe about 15 minutes. In the meantime, the woman was filling up  a few plastic jugs with water that was emerging from a small spring next to the falls. After they left, I continued working with the camera. I suspect he was the monk who lived next to the temple down the path.

I was not so surprised to see the ritual, as a sign near the falls said monks used to perform such rituals in the past. I too, found the water and falls too inviting to resist, and  spent some time beneath the falling water. Invigorated by the cooling water and minus ions, I dressed and headed back down the trail, but not before giving thanks to the local deities. I wonder if I will ever get to Karanno Falls? 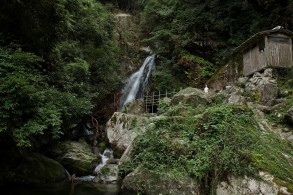 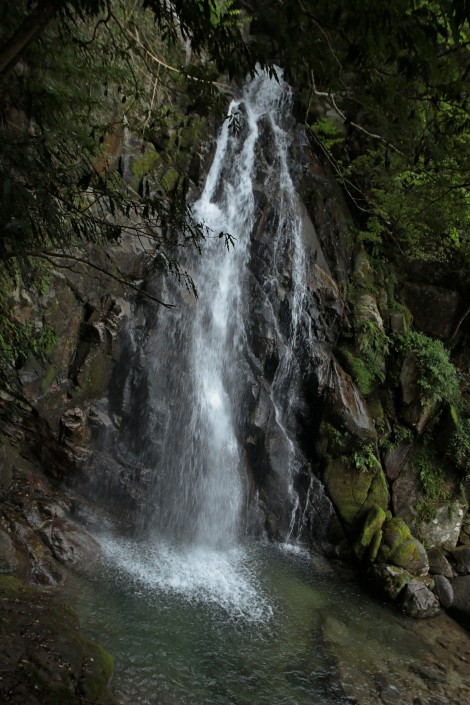