May 21, 2016   I went to Tempaiko Koen last week early in the morning. As I was setting up a tripod to try and photograph a common kingfisher, I heard some rustling in the grass behind me. I turned around and saw the tall grasses moving as an animal approached in my direction. I couldn’t see it until it was right beside me, and then it’s head popped up above the grass.  I was expecting it to be a raccoon dog, (tanuki)  but it was a  Japanese badger, (anaguma)! They are endemic to Japan, but decreasing in numbers, mostly due to habitat loss.They are also nocturnal, so I was surprised it was out in daylight.  It was the first time for me to see one. It sniffed the air for a few seconds, and then continued walking slowly in the same direction until it disappeared over the  far bank of the lake. I’m pretty sure it smelled me, but it didn’t seem to be alarmed by my presence. 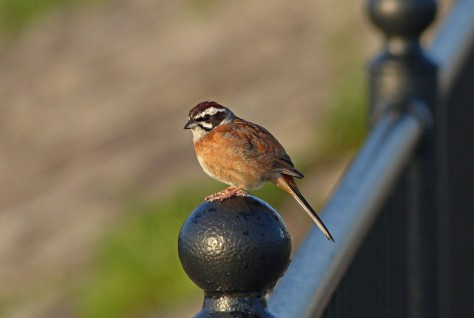 A Siberian meadow bunting, (houjiro) perching on the fence that surrounds Tempai Lake.

One thought on “A Cute Animal Encounter”